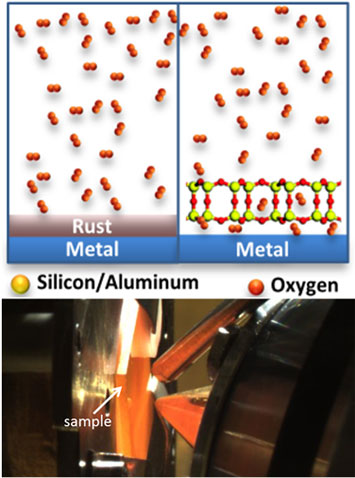 Top: Schematic of the rusting of a metal with and without the nanoporous coating. Bottom: A heated sample at the AP-PES endstation.

The oxidation (rusting) and reduction of Ru(0001) surfaces at the confined space between two-dimensional nanoporous silica frameworks and Ru(0001) have been investigated using synchrotron-based ambient pressure X-ray photoelectron spectroscopy (AP-XPS). The porous nature of the frameworks and the weak interaction between the silica and the ruthenium substrate allow oxygen and hydrogen molecules to go through the nanopores and react with the metal at the interface between the silica framework and the metal surface.  In this work, three types of two-dimensional silica frameworks have been used to study their influence in the oxidation and reduction of the ruthenium surface at elevated pressures and temperatures. These frameworks are bilayer silica (0.5 nm thick), bilayer aluminosilicate (0.5 nm thick), and zeolite MFI nanosheets (3 nm thick). The silica frameworks were found to remain essentially intact under these conditions, but they strongly affect the oxidation of ruthenium, with the 0.5 nm thick aluminosilicate bilayer completely inhibiting the oxidation. The latter is believed to be related to the lower chemisorbed oxygen content arising from electrostatic interactions between the negatively charged aluminosilicate framework and the Ru(0001) substrate.

Discovering the rust-suppressing property of these zeolites, one the most widely used catalyst materials in the chemical industry, could have profound impact on the modeling and comprehension of industrially relevant reactions, such as the conversion of methanol into gasoline.  Additinally, this is the first publication from the CSX-2 beamline, which started commissioning in 2015 and will begin general user operations in the summer of 2016.

CFN Capabilities: CFN’s Ambient Pressure Photoelectron Spectroscopy endstation at the CSX-2 beamline of NSLS-II was used to follow the chemical state of the ruthenium surface at oxidizing and reducing conditions, namely at elevated pressures of oxygen and hydrogen at elevated temperatures.

Oxidation and Reduction Under Cover: Chemistry at the Confined Space Between Ultra-Thin Nanoporous Silicates and Ru(0001)

Research carried out in part at the Center for Functional Nanomaterials and beamline 23-ID-2 (CSX-2) at the National Synchrotron Light Source II, Brookhaven National Laboratory, which are supported by the U.S. Department of Energy, Office of Basic Energy Sciences, under Contract DE-SC0012704. MFI nanosheet preparation was supported from the Center for Gas Separations Relevant to Clean Energy Technologies, an Energy Frontier Research Center funded by the US Department of Energy, Office of Science, Basic Energy Sciences under Award DE-SC000105. J.Z. is supported by BNL LDRD Project No. 15-010. We gratefully acknowledge the support from Kazimierz G., Larry F., Steve B., and Andrew M. at NSLS-II.