A simple method was used to fabricate copper surfaces that efficiently convert carbon dioxide (CO2) into useful industrial chemicals. Oxidizing the surface of copper with a plasma creates a nanostructured surface that becomes highly selective to the formation of ethylene (C2H4). The ethylene production was found to depend on both the surface roughness and the copper species that exist on the surface due to the plasma pre-treatment. This insight could lead to the production of cost-effective routes toward the synthesis of C2H4 from CO2.

Carbon dioxide is a greenhouse gas that is produced when fossil fuels are burned. This work demonstrated a simple, low-cost route to the the conversion of carbon dioxide into ethylene. Ethylene, a widely-employed chemical feedstock, is used in the production of polyethylene plastics, among other materials. The ability to take a potentially harmful waste product and to convert it into a useful chemical could be a game-changing, cost effective approach toward CO2 capture and pollution remediation. 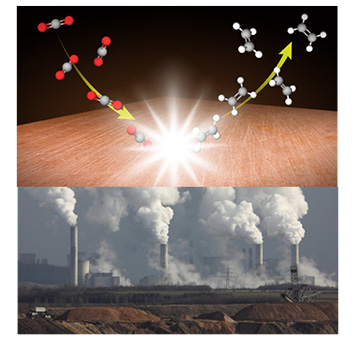 Top) A graphical representation of the CO2 to C2H4 reaction on copper. Bottom) A photo of waste CO2 being emitted from a coal-burning electricity plant. Efficient conversion of waste carbon dioxide into useful ethylene gas has great potential for effective pollution remediation, which could help mitigate global warming.

There is an urgent need to develop technologies that use renewable energy to convert waste products such as carbon dioxide into hydrocarbon fuels. Carbon dioxide can be electrochemically reduced to hydrocarbons over copper catalysts, although higher efficiency is required.  In this work, we used used combined electrochemical measurements with microscopic and spectroscopic characterization techniques to show that the surface species responsible for the carbon dioxide conversion are highly stable.

The authors acknowledge ?nancial assistance from the NSF under Grant No. DMR-0907483. Research was carried out in part at the Center for Functional Nanomaterials, Brookhaven National Laboratory, which is supported by the U.S. Department of Energy, O?ce of Basic Energy Sciences, under Contract No. DE-AC02-98CH10886.