The Curious Behavior of Proteins in Confined Spaces

Preserving the structure and bioactivity of immobilized proteins is of current interest for biosensors and drug delivery platform development. To explore how proteins behave under confinement, nanoporous block copolymer films, with uniform pore size, shape (stripes and cylinders), and chemistry, were filled with proteins. After filling, the stiffness and activity of the proteins were examined as functions of pore size and shape. Proteins, confined within polystyrene (PS) nanopores, were found to be stiffer than proteins that are contained inside larger, submicron, poly(methyl methacrylate) pores. These results suggest that protein stiffness correlates to the extent of confinement, which subsequently influences a protein's activity and elasticity. This information about protein-functionalized polymers can be used to improve the scientific community's comprehension of the interactions among and the function of proteins and engineered surfaces. 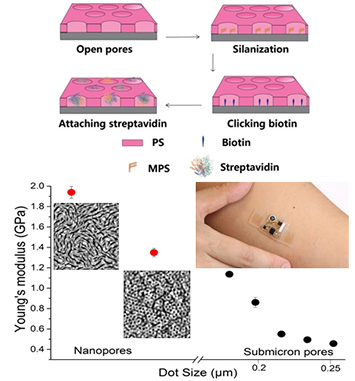 Direct immobilization of proteins inside porous copolymer templates could lead to the realization of a wide range of applications in biosensors and medical implants. Further investigation of the interactions between free proteins and these novel polymer architectures will necessarily impact the efficacy of next-generation biomedical devices.

Immobilization of proteins is widely used in drug delivery systems and biosensors where it is essential to retain the bioactivity and structural stability of immobilized proteins. However, immobilization of a bioactive compound often reduces its activity due to native structural changes resulting from complex of polar and nonpolar interactions between proteins and surfaces. Furthermore, surface topography also influences protein-surface interactions by reducing the contact area between protein and surface. Recent works have investigated the molecular and cage confinement effect on proteins. For example, proteins encapsulated inside pores of silica sol-gel or hydrogel have reported their confinement effect on protein structure and stability. However, the broad pore size distribution which forces the reliance upon averaged moduli values and the inability to manipulate both degree and elasticity of confinement limit the use of such nanoporous materials. In this study, we use nanoporous block copolymer templates to confine protein in uniform pore size, shape and chemistry. Block copolymer nanopores provide confined volumes formed by polymer domain rather than hydrophobic or hydrophilic mesoporous silica. Measuring the elastic properties of polymer and protein is novel since most studies investigate the nano-topography of heterogeneous biological surfaces but not their mechanical properties. Our results show that streptavidin confined in nanopores was found to be stiffer than one within submicron pores. Activity results showed that the immobilized enzymes remain active. Those novel findings reveal that the stiffness of protein changed with hydrophobic polymer at confining medium, and this effect may lead to a decrease in protein activity when compare to the free protein in solution. Our protein functionalized ordered nanoporous polystyrene/poly(methacrylate) films present heterogeneous elasticity and can be used to study interactions between free proteins and designed surfaces. Moreover, the direct immobilization of proteins into nanopores offers a wide range of applications from biosensing to biomedical devices.

We thank Stevens Institute of Technology for start-up funds. We acknowledge the Multiscale Imaging Lab (LMSI) and the MicroDevice Lab (MDL) at Stevens Institute of Technology. We thank Dr. Hongjun Wang for the use of microplate reader. We also thank Dr. Dmytro Nykypanchuk for his help with AFM at CFN. Research carried out in part at the Center for Functional Nanomaterials (CFN), Brookhaven National Laboratory, which is supported by the U.S. Department of Energy, Office of Basic Energy Sciences, under Contract DESC0012704.