New mechanisms are continuously being sought to improve the performance of solar cell devices. A promising approach exploits energy transfer processes within novel architectures that combine layers of nanocrystals with materials that possess high charge mobility, like silicon. To date, fundamental questions persist regarding how different energy transfer processes quantitatively contribute to solar cell performance. A collaboration among CFN and Stony Brook University have implemented this energy transfer mechanism in model hybrid solar cells, comprised of ultrathin silicon and layers of nanocrystals.  The bi-functionality of the nanocrystal layers within the hybrid architecture enhanced the overall power conversion efficiency by up to 45%: ~40% arose from efficient energy transfer between the nanocrystals and the silicon, and ~5% came from the nanocrystal film’s antireflective effects.. 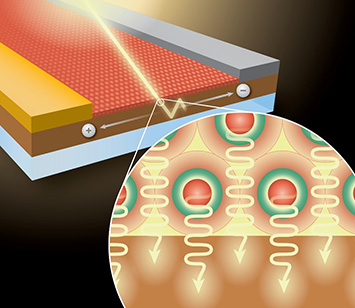 This study represents the first experimental implementation of a new solar cell architecture, which exploits energy transfer from nanocrystals to ultrathin silicon. The scheme described in this work improved the power conversion efficiency of base ultrathin Si solar cells via two distinctive routes, one emerging from the energy transfer and the other from the classical anti-reflective effects of nanocrystal layers. The realized solar cell performance enhancement and quantitative mechanistic understanding provides a pathway for the rational application of energy transfer schemes in solar panels.

Light harvesting via excitonic energy transfer (ET), as exemplified in the natural photosynthesis, has inspired significant research efforts for understanding and designing ET-based light harvesting systems for solar energy conversion and other optoelectronic applications. For the implementation of ET in inorganic photovoltaics (PVs), a new device architecture that combines energy donor layers capable of strong light absorption with energy acceptors made of high-carrier-mobility materials has been suggested. Particularly, the use of semiconductor nanocrystal (NC) layers as energy donors in conjunction with a crystalline thin-film Si energy acceptor has been highlighted in extensive optical studies, where the excitonic sensitization of Si via NC energy donors is predicted to take full advantage of the large absorption cross-section and tunable optical properties of NCs, in tandem with the low exciton binding energy and high carrier mobility of Si. However, no experimental demonstration of such solar cells has been reported to date, while important fundamental questions remain to be elucidated regarding the quantitative contribution of different ET modes to the experimentally measured PV energy conversion performance and how such ET contributions can be differentiated from more classical optical coupling effects.

In this work, we report the ET-driven enhancement of PV performance in an ultrathin Si solar cell architecture consisting of semiconductor NC energy donor layers atop an ultrathin Si energy acceptor with an incorporated in-plane Schottky junction. The well-defined layered device geometry not only decouples the NC energy donor layer from the charge transport and extraction processes in the Si solar cell but also enables us to combine the complementary investigative methods, including PV device characterization, time-resolved optical spectroscopy, transfer-matrix optical simulation, and dipole radiation theory calculation. By using this approach, we establish a quantitative mechanistic understanding of how different ET modes, distinguished from the intrinsic optical interference effects, contribute to the light harvesting in the functioning inorganic solar cells and clearly demonstrate the positive contribution of ET to the enhancement of the device PCE, primarily driven by the effective long-range radiative ET that improves the solar spectrum absorption in the ultrathin Si active layer.

This research was carried out at the Center for Functional Nanomaterials (S. H., D. N., C.-Y. N.) and Sustainable Energy Technologies Department (A. A. and M. D. E.), and Brookhaven National Laboratory (BNL), which is supported by the U.S. Department of Energy, Office of Basic Energy Sciences, under Contract no. DE-SC0012704.