Scientists from UPenn combined the best attributes of 'bottom-up' chemical synthesis and lithographic templating for new manufacture of multifunctional, responsive nanomaterials with properties combining those of the building blocks. Here, they created magnetic, plasmonic nanorods by templated assembly of binary mixtures of superparamagnetic and Au nanocrystals.  The combined functionality enables magnetic switching of infrared light transmission.

This method holds promise for creating new, responsive nanomaterials, for use in applications such as bio-imaging, drug delivery, and water treatment. 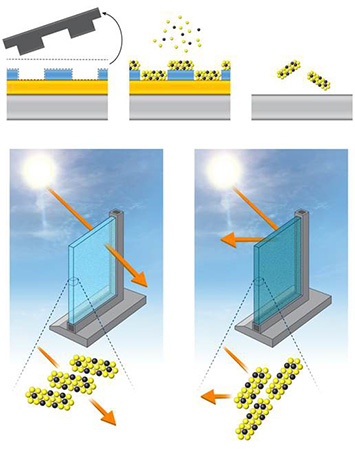 Next-generation 'smart' nanoparticle systems should be precisely engineered in size, shape and composition to introduce multiple functionalities, unattainable from a single material. Bottom-up chemical methods are prized for the synthesis of crystalline nanoparticles, that is, nanocrystals, with size- and shape-dependent physical properties4–6, but they are less suc- cessful in achieving multifunctionality. Top-down lithographic methods can produce multifunctional nanoparticles with precise size and shape control, yet this becomes increasingly difficult at sizes of ∼10 nm. Here, we report the fabrication of multifunctional, smart nanoparticle systems by combining top-down fabrication and bottom-up self-assembly methods. Particularly, we template nanorods from a mixture of superparamagnetic Zn0.2Fe2.8O4 and plasmonic Au nanocrystals. The superparamagnetism of Zn0.2Fe2.8O4 prevents these nanorods from spontaneous magnetic-dipole-induced aggregation, while their magnetic anisotropy makes them responsive to an external field. Ligand exchange drives Au nanocrystal fusion and forms a porous network, imparting the nanorods with high mechanical strength and polarization-dependent infrared surface plasmon resonances. The combined superparamagnetic and plasmonic func- tions enable switching of the infrared transmission of a hybrid nanorod suspension using an external magnetic field.

Support for nanoparticle fabrication and morphological, optical and magnetic characterization provided by the NatureNet Science Fellowship offered by the Nature Conservancy.

Electron-beam lithography to pattern the nanoimprint lithography master stamp was carried out at the Center for Functional Nanomaterials, Brookhaven National Laboratory, which is supported by the US Department of Energy, Office of Basic Energy Sciences, under contract no. DE-AC02- 98CH10886.

Synthesis of Au nanocrystals was supported by National Science Foundation grant no. NSF-561658.

Synthesis of Zn0.2Fe2.8O4 nanocrystals was supported by the Catalysis Center for Energy Innovation, an Energy Frontier Research Center funded by the US Department of Energy, Office of Basic Energy Sciences under award no. DE-SC0001004.

Magnetometry was performed in facilities supported by the National Science Foundation MRSEC Program under award no. DMR-1120901.

The mechanical testing was supported by the US Department of Energy, Office of Basic Energy Sciences, Division of Materials Science and Engineering under award no. DE-SC0008135.