Bimetallic alloy nanoparticles are important catalysts, and understanding the ways they oxidize is key to designing materials for high performance.  However, it has been experimentally difficult to observe both the local structure and chemistry during oxidation of multi-component materials.  This work combines multiple advanced electron microscopy techniques to reveal the surprising complex ways these materials undergo oxidation on both exterior and interior surfaces. 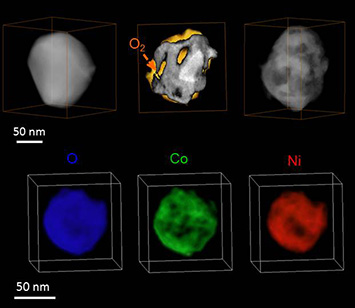 Top Row: 3D evolution of a Ni2Co particle before (left), during (middle) and after (right) oxidation. Bottom Row: 3D mapping of oxygen (blue), cobalt (green), and nickel (red) in a fully oxidized nanoparticle.

An understanding of bimetallic alloy oxidation is key to the design of hollow-structured binary oxides and the optimization of their catalytic performance. However, one roadblock encountered in studying these binary oxide systems is the difficulty in describing the heterogeneities that occur in both structure and chemistry as a function of reaction coordinate.  This is due to the complexity of the three-dimensional mosaic patterns that occur in these heterogeneous binary systems. By combining real-time imaging and chemical-sensitive electron tomography, we show that it is possible to characterize these systems with simultaneous nanoscale and chemical detail. We find that there is oxidation-induced chemical segregation occurring on both external and internal surfaces. Additionally, there is another layer of complexity that occurs during the oxidation, namely that the morphology of the initial oxide surface can change the oxidation modality. This work elucidates the pathways that can control the morphology of binary oxide materials.

This research is supported by the Center for Functional Nanomaterials, which is a U.S. DOE Office of Science Facility, at Brookhaven National Laboratory under Contract No. DE-SC0012704. L. H. was supported by a scholarship from the China Scholarship Council (CSC) (201406250041). Q. M. and Y. Z. were supported by DOE-BES, Materials Sciences and Engineering Division under Contract DESC0012704.