Ionic liquids — liquid salts made by combining positively charged cations and negatively-charged anions — have potential uses as advanced battery electrolytes. When the electrolytes contact an electrode, they form a 'double-layer' a few nm thick, where important electrochemical reactions take place. CFN scientists have created a technique to observe in real time how ions in the double-layer reconfigure under applied voltage bias.

Determining the electrolyte response to applied voltages is key to optimizing the performance of ionic liquids for energy storage devices. 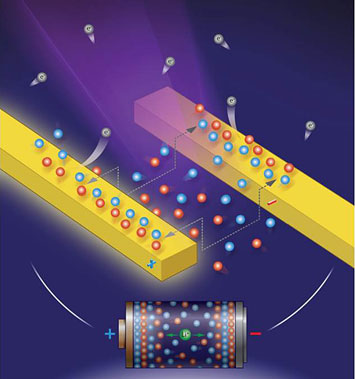 An illustration of the experimental setup for tracking real-time evolution of ionic liquid: an ultraviolet light shines on biased electrodes covered with iconic liquid to excite photoelectrons, which are collected to form a spatially resolved image.

Ionic liquids (IL) are salts that are liquid at around room temperature. They have a notable set of chemical and electrical properties, making them attractive for use in energy storage devices as electrolytes. A very high capacitance can be achieved when the IL comes into contact with electrified surfaces, giving rise to new possibilities for electrolyte-gated devices and supercapacitors. The structure of ILs at the liquid/solid interface formed between an IL electrolyte and an electrode in such devices is a crucial factor in determining their overall efficiency. This critical interface is confined in a region of nanometers in length and it is called an electric double layer (EDL). Although much work has been done to identify the exact structure of the EDL, acquiring information from a buried interface in real time as the structure is changing in response to applied voltage bias is no trivial task. To date, the data extracted from such buried interfaces typically represent the initial state and the final state of the EDL, rather than the process occurring in-between. In the present work a new strategy to probe the intermediate state in-situ and visualize the motion of ions in real time as a function of applied voltage is devised by utilizing photoemission electron microscopy (PEEM). In addition to the observation of the evolution of the structure of IL/electrode interface, it is also possible to probe both, working and counter electrodes at the same time. This capability enables the real-time observation of correlated responses and investigation of ion transport between the two electrified electrodes.

This work was supported by the U.S. Department of Energy, Office of Basic Energy Sciences, Division of Chemical Sciences, Geosciences and Biosciences, under contract # DE-SC0012704, and it used resources of the Center for Functional Nanomaterials, which is a U.S. DOE Office of Science Facility at Brookhaven National Laboratory. F.W. was supported by the Laboratory Directed Research and Development (LDRD) program at Brookhaven National Laboratory.