Can you see the invisible glass? 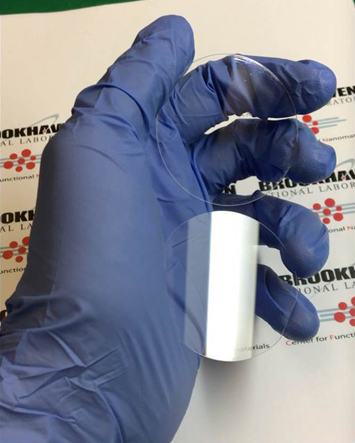 Photograph of a person holding a piece of regular glass (lower), which shows the reflection of an overhead fluorescent light. A similar piece of 'invisible glass' (upper) does not reflect the overhead light and remains completely transparent.

Most optoelectronic components and consumer display devices require glass or plastic covers for protection against the environment. Optical reflections from these encapsulation layers can degrade the device performance or lessen the user experience. Here, we use a highly scalable self-assembly based approach to texture glass surfaces at the nanoscale, reducing reflections by such an extent so as to make the glass essentially invisible. Our nanotextures provide broadband antireflection spanning visible and infrared wavelengths (450–2500 nm) that is effective even at large angles of incidence. This technology can be used to improve the performance of photovoltaic devices by eliminating reflection losses, which can be as much as 8% for glass encapsulated cells. In contrast, solar cells encapsulated with nanotextured glass generate the same photocurrent as when operated without a cover. Ultra-transparent windows having surface nanotextures on both sides can with- stand three times more optical fluence than commercial broadband antireflection coatings, making them useful for pulsed laser applications.