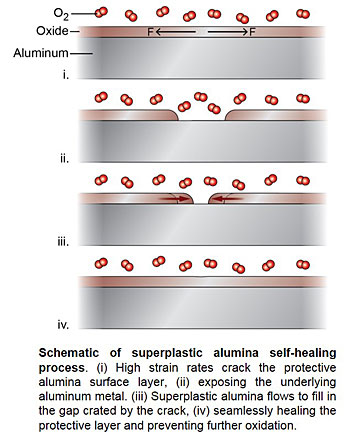 Although it is well-known that the thin layer of native aluminum oxide (alumina) protects the underlying aluminum metal from oxidation, the oxide formation process and its microscopic mechanical behavior has never been directly observed.  Using in-situ electron microscopy, a team of MIT and CFN scientists discovered that surface alumina deforms like a liquid (a ‘superplastic’) under strain, matching the metal deformation without cracking. The experiments also visualized atomic self-healing of aluminum surfaces exposed during higher strain rates.

This work reveals the liquid-like superplasticity of alumina and atomic details of its crucial role in protecting aluminum from oxidation.

Effective protection of metals from environmental degradation relies on the integrity of surface oxides as diffusion barriers. Ideally, the passivation layer can repair its own breaches quickly under deformation. While studies suggest that the native aluminum oxide may manifest such properties on aluminum, the process has not been experimentally proved because direct observations of the environmental deformation of aluminum oxide and its initial formation at room temperature are challenging.  A team of MIT and BNL scientists performed in situ experiments to stretch pure aluminum nano tips under O2 gas environments in a transmission electron microscope. They discovered that aluminum oxide deforms like liquid and can match the deformation of Al without any cracks/spallation at moderate strain rates. Higher strain rates form cracks in the aluminum oxide layer, exposing the underlying metal.  These experiments visualized the self-healing process of aluminum oxide at atomic resolution. Unlike traditional thin film growth or nanoglass consolidation processes, they reveal seamless coalescence of new oxide islands without forming any glass-glass interface or surface grooves, indicating greatly accelerated glass kinetics at the surface compared to the bulk.

We acknowledge support from NSF DMR-1410636. This research used resources of the Center for Functional Nanomaterials, which is a U.S. DOE Office of Science Facility, at Brookhaven National Laboratory under Contract No. DE-SC0012704.