Small Polymers Can Have a Big Impact on Self-Assembly 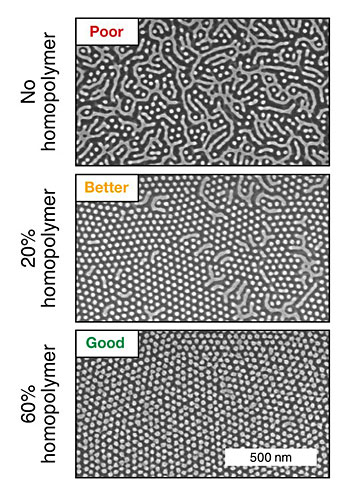 Polymer self-assembly enables facile and inexpensive nanopatterning over large areas.  Asymmetric block copolymers that naturally self-assemble to form close-packed nanoscale cylinders are appealing because the patterns they form can be used to fabricate functional materials such as nanotextures for light management and wettability control, as well as aligned nanoporous membranes for gas or liquid separation/filtration.  More robust membranes and nanotextures can be synthesized with thicker block copolymer films, which require long thermal annealing times to obtain the required degree of pattern order.  CFN scientists investigated the ordering of cylindrical block copolymers and investigated using short homopolymers of the same type as both polymer blocks of the copolymer as a “grease” to accelerate pattern assembly.  When the film thickness exceeds the natural spacing length of packed cylinders, the unblended block copolymer produced randomly oriented cylinders, while the blends of the same thickness can self-assemble into uniformly oriented cylinders.  Using in-situ X-ray scattering during thermal annealing and ex-situ electron microscopy, the team found that self-assembly in unblended films is frustrated by the random initial orientation of cylinders, and the system is trapped in a defective state.  This frustration can be alleviated in blended films in which the system “jumps” to a higher-ordered state as a result of rapid cylinder reorientation during early stages of annealing.  Overall, this study shows how a seemingly small change to the self-assembling polymer composition reaps large gains in the ease of nanostructured material synthesis through self-assembly.

CFN Materials Synthesis facilities were used to prepare and image samples.  X-ray scattering was carried out at the CMS beamline, operated in partnership between CFN and NSLS-II.

This research used resources of the Center for Functional Nanomaterials and the National Synchrotron Light Source II, which are U.S. DOE Office of Science User Facilities, at Brookhaven National Laboratory under Contract No. DE-SC0012704.