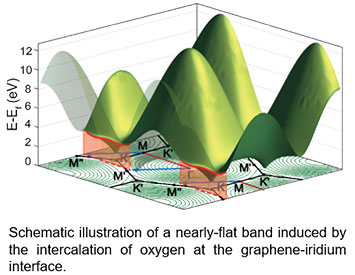 CFN Users from Columbia University working in collaboration with CFN staff found that intercalating oxygen at the interface between graphene and iridium can change the electronic states of this interface resulting in nearly-flat bands. The scientists used micro-spot angle-resolved photoemission spectroscopy (µARPES) measurements and density-functional-theory calculations to explain the mechanism by which ordered oxygen induces a nearly-flat band structure in graphene.

Controlling the electronic states of 2D interfaces will enable new opportunities to engineer band structures and electronic properties in graphene and other 2D materials.

Understanding the interactions between graphene and its periodic surroundings is of fundamental importance to control the band structure and electronic properties of this prototypical 2D material. Graphene-substrate interactions were reported to be largely decoupled by interfacial intercalations, resulting in quasi-freestanding graphene (QFG). The QFG was believed to be too weakly coupled to yield interesting interfacial physics. However, the research teams from Columbia University and CFN conducted systematic experimental and theoretical work to study the interactions between QFG and its surroundings. Their experiments at Columbia based on two-photon photoemission revealed electronic states around the Brillouin zone center with a nearly-flat dispersion that emerged for oxygen-intercalated graphene-iridium. Theoretical work done at CFN with the computational facilities explained how these states arise from a Brillouin zone-folding effect due to periodic intercalations. The micro-ARPES measurements carried out by CFN scientists using the XPEEM endstation confirmed the zone-folding hypothesis.

CFN Proximal Probes and Theory & Computation facilities were used for this study. The µARPES measurements were carried out in the X-ray photoemission electron microscopy (XPEEM) endstation at the ESM beamline, operated in partnership between CFN and NSLS-II.

The work was supported by the U. S. Department of Energy, Office of Basic Energy Sciences, under Contract No. DE-FG02-90ER14104. Our research used resources of the Center for Functional Nanomaterials and the National Synchrotron Light Source II, which are U. S. DOE Office of Science Facilities, and the Scientific Data and Computing Center, a component of the Computational Science Initiative, at Brookhaven National Laboratory, under Contract No. DE-SC0012704.