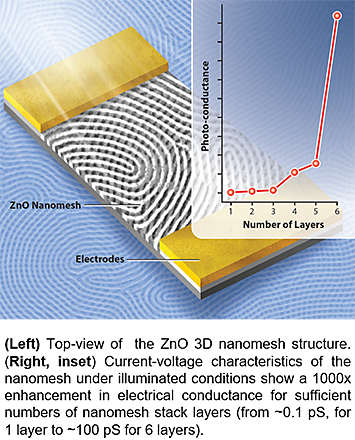 Self-assembled block copolymers generate unique nano-morphologies that are easily scalable and not possible using other patterning approaches. Infiltration synthesis enabled the conversion of block copolymer patterns into 3D semiconducting ZnO nanomesh, which is a useful electronic material for sensors and devices.

Three-dimensional (3D) nanoarchitectures can offer enhanced material properties, such as large surface areas that amplify the structures’ interaction with environments making them useful for various sensing applications. Self-assembled block copolymers (BCPs) can readily generate various 3D nanomorphologies, but their conversion to useful inorganic materials remains one of the critical challenges against the practical application of self-assembled BCPs. By using the CFN’s world-class expertise in BCP self-assembly and vapor-phase inorganic infiltration, the results not only illustrate a new, large-area scalable, metal oxide thin film nanoarchitecture fabrication method utilizing industry-compatible polymer solution coating and atomic layer deposition, but also represent the first demonstration of the optoelectrical functionality based on the ZnO nanoarchitecture directly generated by the infiltration synthesis in self-assembled BCP thin films.

This research was carried out at the Center for Functional Nanomaterials, which is a U.S. DOE Office of Science Facility, at Brookhaven National Laboratory under Contract No. DE-SC0012704.