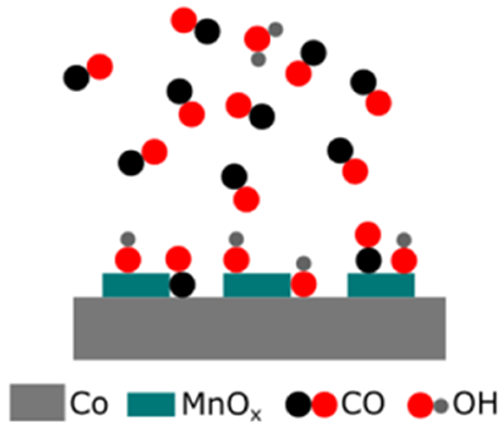 An illustration showing that manganese oxide increases the amount of carbon monoxide (CO) adsorbed on the catalyst surface, in turn increasing the rate at which CO can be converted to gasoline and diesel.

Researchers from the Weizmann Institute of Science and CFN showed how manganese oxide enhances the catalytic activity of cobalt, which converts carbon monoxide (CO) and hydrogen to gasoline and diesel fuel. The team used ambient pressure x-ray photoelectron spectroscopy to show that manganese oxide increases CO adsorption on the catalyst surface. Water, a reaction product, competes with CO for adsorption sites.

MnOx enhances the catalytic activity of Co during Fischer–Tropsch synthesis, increases selectivity toward C5+ products, and decreases methane formation. These desired traits are thought to result from a higher CO adsorption energy and thus potentially higher CO coverage. To investigate this hypothesis, ambient-pressure x-ray photoelectron spectroscopy (APXPS) was used to probe the CO coverage of Co foil with increasing MnOx amounts at room temperature. The APXPS technique permits the quantification of chemical species on a surface from ultrahigh vacuum to the mbar pressure regime. CO was found to adsorb at both Co and MnOx sites. The electronic effect which results in the promotion of CO adsorption also promotes the adsorption of OH groups from background water vapor pressures. This process competes with CO adsorption, despite the water pressure being ∼8 orders of magnitude lower than the CO pressure at 1 mbar. Because water is a product of Fischer–Tropsch synthesis, this result is relevant to understanding how MnOx acts as a promoter. This finding highlights the importance of considering unexpected contributions of background impurities in APXPS and other AP surface-science techniques.

This work was supported by Israel Science Foundation’s (ISF) grant no. 919/18. This research used resources of the Center for Functional Nanomaterials, which is a U.S. DOE Office of Science Facility at Brookhaven National Laboratory under contract no. DE-SC0012704. B.E. acknowledges the support from the Zuckerman STEM Leadership Faculty Fellowship, the Ruth and Herman Albert Scholarship Program for New Scientists, and the Abramson Family Center for Young Scientists.