On a Quest to Tailor the Reactivity of Oxide Catalysts 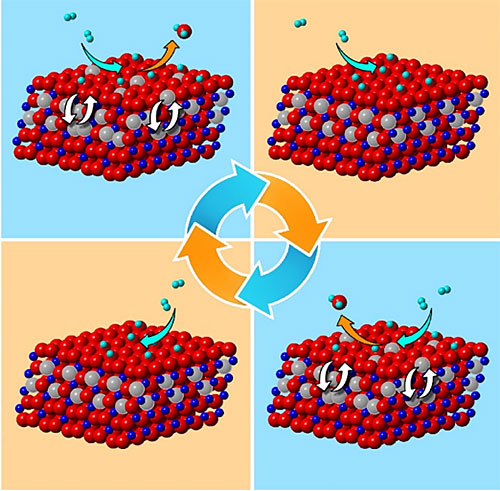 An illustration showing how the cyclic formation of water molecules at the surface induces the cyclic order-disorder transformations of oxygen vacancies in the subsurface.

CFN users from Binghamton University led a collaborative team studying hydrogen oxidation over copper oxide (CuO) catalyst surfaces by simultaneously resolving atomic-scale structural changes of the surface and subsurface in real time. Cyclic oscillations in the form of ordering and disordering of oxygen vacancies were detected in the subsurface.

Differentiating the roles of surface and subsurface states (including nonstoichiometry) in reaction dynamics is important to a wide range of chemical processes involving surface-subsurface mass transport, such as heterogeneous catalysis, oxidation, corrosion, and carburization.

Surfaces and subsurfaces are commonly considered separate entities because of the difference in bonding environments. They are often investigated separately as a result of the experimental challenges in differentiating surface and subsurface effects. Using in situ atomic-scale transmission electron microscopy to simultaneously resolve the surface and subsurface, we show that the hydrogen–CuO surface reaction results in structural oscillations in deeper atomic layers via cycles of ordering and disordering of oxygen vacancies in the subsurface. Combining our experimental findings with atomistic calculations, we show that the structural oscillations in the subsurface are from the hydrogen oxidation–induced cyclic loss of oxygen from the oxide surface. These results demonstrate the propagation of the surface reaction dynamics into the deeper layers, which induces nonstoichiometry in the subsurface.

Ambient-pressure x-ray photoelectron spectroscopy measurements were carried out at the In situ and Operando Soft X-ray Spectroscopy (IOS) beamline at an endstation built in partnership between CFN and NSLS-II.

This work was supported by the U.S. Department of Energy, Office of Basic Energy Sciences, Division of Materials Sciences and Engineering under Award No. DE-SC0001135. This research used resources of the Center for Functional Nanomaterials, the 23-ID-2 IOS beamline at the National Synchrotron Light Source II, and the Scientific Data and Computing Center, a component of the Computational Science Initiative, at Brookhaven National Laboratory which is supported by the US Department of Energy, Office of Basic Energy Sciences, under Contract No. DE-SC0012704. This work also used the computational resources from the Extreme Science and Engineering Discovery Environment (XSEDE) through allocation TG-DMR110009, which is supported by National Science Foundation grant number OCI-1053575.