Framing up Design of Nanomaterials with DNA 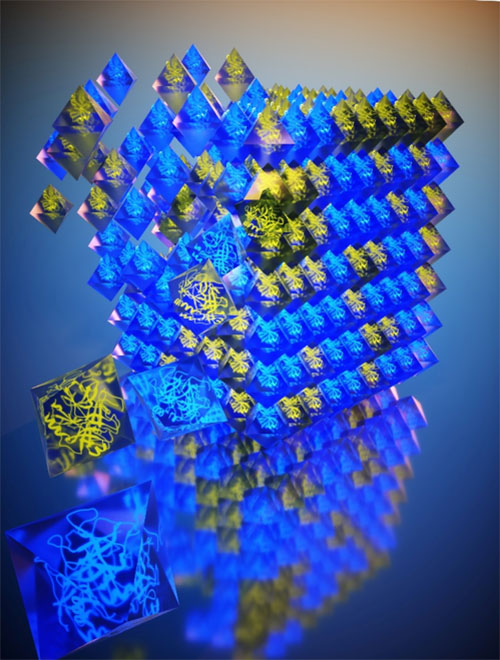 CFN scientists developed a platform for self-assembly of ordered, three-dimensional (3D) arrays of DNA frames loaded with nanoscale cargos. Using electron microcopy and synchrotron-based x-ray scattering, the team studied the relationship between the assembled 3D structures and DNA frame designs. They demonstrated use of this platform for design of new optical and catalytic nanomaterials.

The ability to organize nanoscale objects into well-defined three-dimensional (3D) arrays can translate advances in nanoscale synthesis into targeted material fabrication. Despite successes in nanoparticle assembly, most extant methods are system specific and not fully compatible with biomolecules. The team reports a platform for creating distinct 3D ordered arrays from different nanomaterials by using DNA-prescribed and valence-controlled material voxels. These material voxels consist of 3D DNA frames that integrate nano-objects within their scaffold, thus enabling the object’s valence and coordination to be determined by the frame’s vertices, which can bind to each other through hybridization. Such DNA material voxels define lattice symmetry through the spatially prescribed valence, decoupling the 3D assembly process from the nature of the nanocomponents (e.g., intrinsic properties and shapes), as the team shows by assembling metallic and semiconductor nanoparticles and protein superlattices. In addition, they support the technological potential of such an assembly approach by fabricating light-emitting 3D arrays with diffraction-limited spectral purity and 3D enzymatic arrays with increased activity.

CFN Materials Synthesis & Characterization, Electron Microscopy, and Advanced Optical Spectroscopy & Microscopy Facilities were used for this study, along with the NSLS-II CHX beamline.

Optical characterization was performed at CFN by M. Cotlet and J. Chen. Cryo-EM data was collected at the David Van Andel Advanced Cryo-Electron Microscopy Suite in the Van Andel Research Institute. HL was supported by the US National Institutes of Health (GM111472 and GM124170) and the Van Andel Research Institute. This research used resources of the Center for Functional Nanomaterials, and the National Synchrotron Light Source II, which are U.S. DOE Office of Science Facilities at Brookhaven National Laboratory under Contract No. DE-SC0012704. This work was supported by the US Department of Energy, Office of Basic Energy Sciences, grant DE-SC0008772.