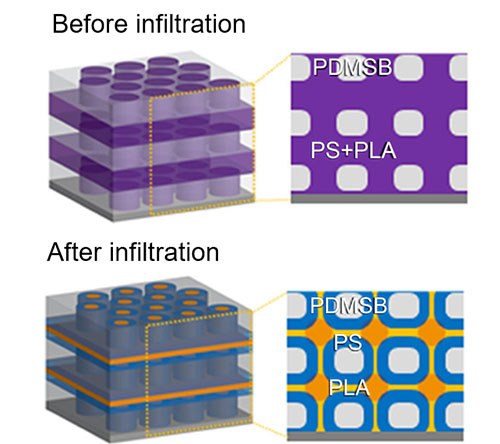 Complex, 3D ordered architectures of self-assembled block copolymers hold promise for nanofabrication and lithography but are challenging to resolve because of the low contrast between phase-separated blocks. Vapor-phase block-selective infiltration is an effective alternative to slow, toxic, conventional staining for resolving these nanoarchitectures. This work also provides a new nanofabrication strategy for synthesizing multicomponent 3D nanostructures by assembly.

Self-assembled 3D internal nanostructures of block copolymer (BCP) films hold promise for nanofabrication of useful materials for electronic devices, nanoporous membranes, and functionalized surfaces. However, the geometry of these structures is highly challenging to resolve, even by advanced synchrotron x-ray scattering or transmission electron microscopy (TEM) tomography, because of an intrinsically low chemical contrast between more than two block components. Here, we apply vapor-phase infiltration (VPI)—an organic-inorganic hybridization method derived from atomic layer deposition—as a facile, highly block-selective polymer staining method. This method enables the determination of self-assembled 3D internal structures of true “three-color” terpolymers (triblock copolymers), which have been impossible to directly resolve by other means. Using this method, we selectively infiltrate zinc oxide into an organic block (PLA) of a triblock terpolymer film (DSL) to distinguish the 3D morphologies of the two organic blocks (PLA and PS), which are otherwise indistinguishable under TEM. The demonstrated accurate site-specific infiltration throughout the 260 nm thick film also shows the potential of the approach for generating multicomponent functional 3D nanocomposites based on self-assembled BCPs.

The CFN Materials Synthesis & Characterization, Nanofabrication, and  Electron Microscopy facilities were used in this study.

This research was carried out at the Center for Functional Nanomaterials, which is a U.S. DOE Office of Science Facility, at Brookhaven National Laboratory under Contract No. DE-SC0012704. The authors also acknowledge the support of the Semiconductor Research Corporation and Tokyo Electron Limited.