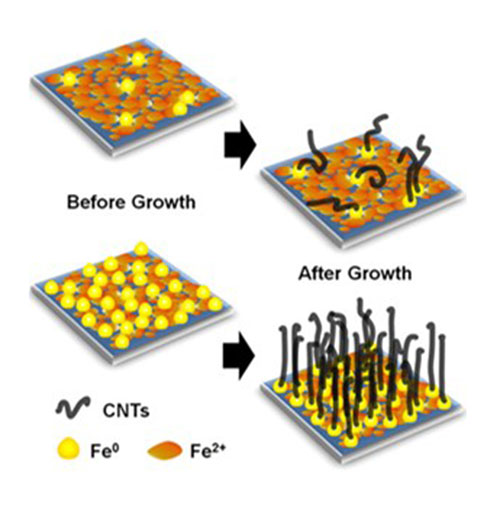 A team from the Air Force Research Laboratory and CFN determined the influence of carbon and hydrogen on iron nanocatalysts used to grow “forests” of carbon nanotubes. This work shows that carbon byproducts can efficiently activate the catalysts by reducing them,  resulting in the growth of densely packed, tall carbon nanotube forests in high yield.

Carbon nanotubes have physical and chemical properties attractive for sensors, energy storage, and composite materials. This study provides a new fundamental understanding of common practices used to synthesize these materials and provides a pathway to improving carbon nanotube densities.

A barrier to the large-scale production of high-quality carbon nanotubes (CNTs) is our limited understanding of the factors influencing their yield relative to the number of catalyst particles. This lack of understanding is evident in the frequent use of Edisonian approaches to give high-yield CNT growth and in the sometimes-confusing influence of trace residues on reactor walls. In order to create conditions for a reproducible CNT yield with a large-scale and reliable CNT synthesis, it is imperative to fundamentally understand how these common practices impact catalytic activity and thus CNT number density. The team used ambient-pressure x-ray photoelectron spectroscopy (AP-XPS) to reveal the influence of carbon and hydrogen on the coupling between catalyst reduction and CNT nucleation from an iron catalyst film. They observed a positive correlation between the degree of catalyst reduction and the density of vertically aligned CNTs (forests), verifying that effective catalyst reduction is critical to CNT nucleation and to the resulting CNT growth yield. They demonstrated that the extent of catalyst reduction is the reason for low CNT number density and lack of self-organization, lift-off, and growth of CNT forests. The team also showed that hydrocarbon byproducts from consecutive growths can facilitate catalyst reduction and increase CNT number density significantly. These findings suggest that common practices used in the field—such as reactor preconditioning—aid in the reduction of the catalyst population, thus improving CNT number density and enabling the growth of dense forests. The results also motivate future work using AP-XPS and complementary metrology tools to optimize CNT growth conditions according to the catalyst chemical state.

The CFN Electron Microscopy and Proximal Probes Facilities were used in this study, including the ambient-pressure x-ray photoelectron spectroscopy instrument at the NSLS-II IOS beamline, operated in partnership between the CFN and NSLS-II.

Research carried out in part at the 23-ID-2 (IOS) beamline of the National Synchrotron Light Source-II and the Center for Functional Nanomaterials, Brookhaven National Laboratory, supported by the U.S. Department of Energy, Office of Basic Energy Sciences, Contract No. DE-SC0012704. J.Z. was supported by BNL LDRD Project No. 15-010. This research was performed while the author (J.C.-N.) held an NRC Research Associateship award at the Air Force Research Laboratory. The authors acknowledge support from the Air Force Office of Scientific Research under LRIR No. 16RXCOR322. N.T.D, P.R.K., and A.J.H. acknowledge support from the Department of Energy, Office of Science, Basic Energy Sciences (DE-SC0010795); and the National Aeronautics and Space Administration (NASA) Space Technology Research Institute (STRI) for Ultra-Strong Composites by Computational Design (US-COMP), grant number NNX17AJ32G.