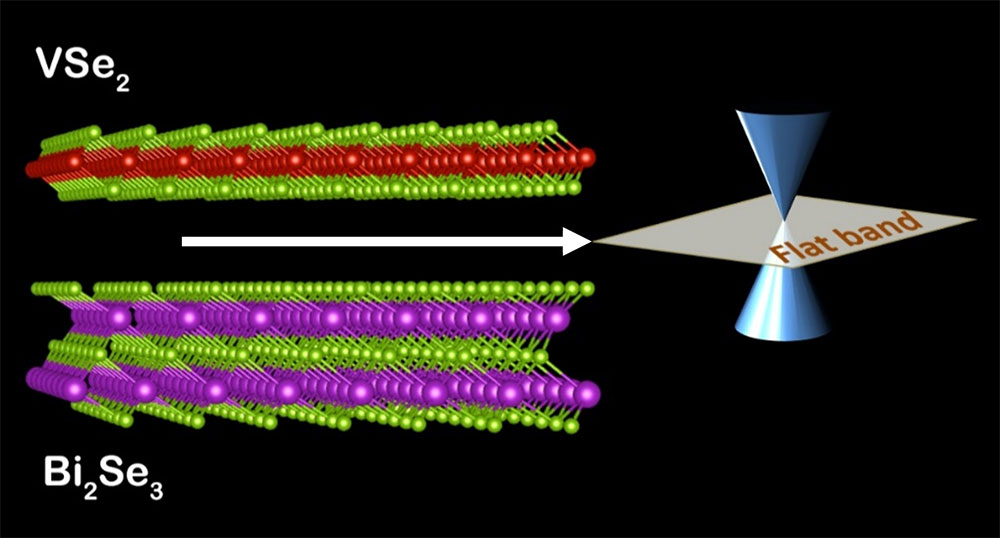 A collaborative team of Brookhaven scientists and users made the first experimental observations of the energetically flat electronic band formed at the interface of a heterostructure between vanadium diselenide and bismuth selenide layers. Angle-resolved photoemission spectroscopy (ARPES) measurements confirm the dispersionless character of electronic excitations in the energy band structure.

Electronic states in flat energy band structures can possibly support quantum states of matter such as superconductivity, ferromagnetism, and the fractional quantum Hall effect, at higher temperatures, for potential applications in devices for quantum information science. Such flat bands are difficult to realize in material systems.

Novel quantum computers harness the inherent emergent phenomena of the materials from which they are made. These quantum phenomena are an integral part of the atomic makeup and physics of materials, which is largely determined by the organization of electrons within them (energy band structure). To ultimately control quantum effects, researchers need to investigate the materials’ distinct electronic band structure. Such an understanding could enable engineering of specific quantum effects for new quantum computers. The biggest disadvantage of ordinary materials used in quantum information systems is the extremely low temperature required due to environmental impacts. Topological materials are believed to be promising for fault-tolerant quantum computers because of their immune electronic structure against their surroundings. The properties of topological materials need to be further modified to be used in novel technological devices.

In this study, a team of researchers observed, for the first time, an emergent flat band structure in a vanadium diselenide (VSe2) bismuth selenide (Bi2Se3) topological insulator heterostructure. This observation opens the pathway for future applications in high-temperature superconductors, as the superconductivity onset temperature can be boosted by a topological flat band. After synthesizing samples of the material, the team used multiple methods to investigate the electronic structure. At the National Synchrotron Light Source II (NSLS-II), they used the angle-resolved photoemission spectroscopy (ARPES) and x-ray photoemission electron microscopy (XPEEM) experimental endstations of the Electron Spectro-Microscopy (ESM) beamline, operated in partnership with the Center for Functional Nanomaterials (CFN) Advanced UV and X-ray Probes Facility. At the CFN, they performed high-angle annular dark-field scanning transmission electron microscopy and scanning tunneling microscopy. The researchers showed that the flat band structure covers the entire Brillouin zone (the smallest, repeating cell within a crystal structure) and shows a two-dimensional nature. Their findings are the first example of a special electronic structure—called dispersionless electronic excitation—in a topological material. These results could open a new pathway for the experimental realization and control of novel quantum effects.

This research used ESM (21-ID-1, 21-ID-2) beamline of the National Synchrotron Light Source II, a US Department of Energy (DOE) Office of Science User Facility operated for the DOE Office of Science by Brookhaven National Laboratory under Contract number DE-SC0012704. This work also used the resources of the Center for Functional Nanomaterials, Brookhaven National Laboratory, which is supported by the U.S. Department of Energy, Office of Basic Energy Sciences, under Contract number DE-SC0012704. ARPES experiments in Hiroshima were performed with the approval of program advisory committee of HISOR) Proposal number 19BG041).