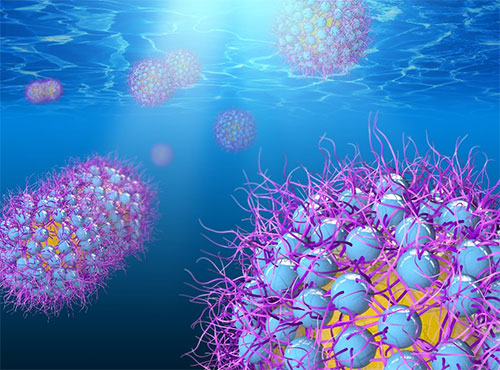 CFN users from Binghamton University simulated the interactions between oil-in-water emulsion droplets covered by nanoparticles grafted with hair-like polymers. Their simulations revealed that polymer-grafted nanoparticles are excellent stabilizers of colliding droplets. This stability can be controlled by tuning salt concentration and pH.

The ability to stabilize or destabilize emulsions on demand is important for many applications, including enhanced oil recovery, drug delivery, and catalysis. This study provides important insights into designing responsive, switchable emulsions.

Pickering emulsions are a type of emulsion stabilized by only solid particles at an oil-water interface. By replacing conventional surfactant molecules with solid particles, Pickering emulsions are more stable against coalescence and can have many useful properties. They play an important role in various fields, including cosmetics, drug delivery, catalysis, and petroleum processes such as enhanced oil recovery and heavy oil transportation. However, in some applications (e.g., oil recovery, emulsion polymerization), temporary stability is more desirable than long-term stability. Thus, there is a need for switchable or stimuli-responsive Pickering emulsions that can be transformed between stable and unstable states by basic environmental triggers, such as pH, light, or temperature. Polymer-grafted nanoparticles, in which polymers are grafted onto the particle core, not only serve as potent emulsifiers but also offer a flexible platform for developing stimuli-responsive or even dual-responsive emulsifiers to stabilize or destabilize emulsions on demand, depending on the application.

Computer simulations can help guide experiments to develop new particles as emulsifiers. In this study, we use a mesoscale computational model to study the interaction of two oil-in-water emulsion droplets covered by nanoparticles grafted with charged polymers (polyelectrolytes). We quantify the efficacy of these pH-responsive ”hairy” nanoparticles in stabilizing emulsions at different degrees of ionization by measuring the maximal resistance between colliding droplets. The simulations reveal that the resistance is attributed to direct electrostatic repulsion, the image charge effect near the water-oil interface, and steric hindrance among extended polymers. When the particle density on the droplet surface is relatively low, the increasing resistance forces at higher degrees of ionization can effectively prevent droplet coalescence. Conversely, increasing ionization at high particle surface coverage triggers substantial desorption of particles from the interface. This deposition unexpectedly reduces the resistance force and facilitates coalescence. The model also uncovered different interfacial assembly structures of hairy particles for stabilizing droplets at different surface coverage. The findings of this work will guide the development of novel particles for controlling droplet assembly and pave the way to designing switchable emulsions for many important applications.

Simulations of electrostatic, dissipative particle dynamics were carried out using the CFN Theory and Computation Facility.

The authors thank the Donors of the American Chemical Society Petroleum Research Fund for support of this research under grant 56884-DNI9. Generous allocation of computing time was provided by the Watson Data Center at Binghamton University and the Center for Functional Nanomaterials, which is a U.S. DOE Office of Science Facility, at Brookhaven National Laboratory under contract No. DE-SC0012704.