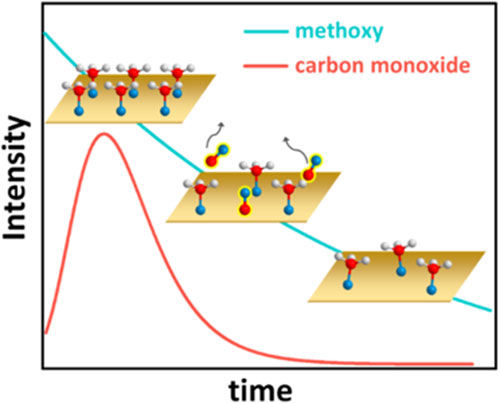 Depiction of methanol-on-copper reaction kinetics [hydrogen atoms (white), oxygen (blue), and carbon (red)]. Initially, methanol covers the copper surface. Each methanol molecule then loses a hydrogen atom and forms a bond to Cu, which then reacts to form CO (center graphic). Methoxy coverage is depicted by the blue line, and CO coverage by the red line.

Researchers at the Weizmann Institute of Science and CFN discovered that methanol to hydrogen conversion using copper catalysts displays kinetic behavior that deviates from well-established models, which is explained by measurements of intermediates in the reaction pathway.

This work illuminates a better understanding of interactions between methanol vapor and copper surfaces, which is important for the development of tunable copper catalysts for hydrogen production.

Methanol is a leading candidate for hydrogen storage since it is a liquid that is compatible with our current gasoline distribution system and holds a large amount of hydrogen by volume. Cu is a cheap material that is known to convert methanol to hydrogen, but a better understanding of the surface chemistry is required to tune Cu catalysts for hydrogen production. The adsorption kinetics of methanol onto Cu surfaces were followed with infrared spectroscopy. Surprisingly, a large initial methanol coverage was found to occur independent from the Cu temperature. As adsorbed methanol coverts to bound methoxy groups on the surface, excess methoxy is converted to carbon monoxide that desorbs. This high initial surface coverage followed by a chemical reaction leading to methoxy equilibrium coverage is contrary to standard adsorption kinetic models. In situ measurement of the adsorption with ambient pressure X-ray photoelectron spectroscopy at the Center for Functional Nanomaterials confirmed the trends with easier surface coverage calculations. A few Cu surfaces were investigated, and the extraordinary surface kinetics were found to be significantly faster with the more loosely packed Cu surface.

This work was supported by the Israel Science Foundation’s (ISF) Research Grant No. 919/18. B.E. acknowledges the support from the Zuckerman STEM Leadership Faculty Fellowship. This research used resources of the Center for Functional Nanomaterials (CFN), which is a U.S. Department of Energy Office of Science User Facility, at Brookhaven National Laboratory under Contract No. DE-SC0012704.