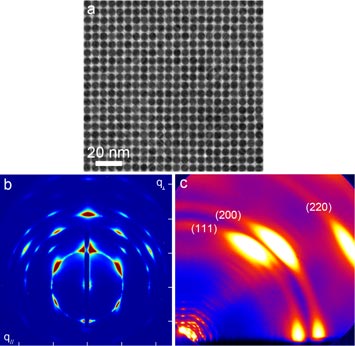 a) Transmission electron micrograph of a QD superlattice, highlighting the narrow size dispersity b) Grazing-incidence small-angle X-ray scattering pattern of a large area (1 mm2) QD film arranged in a body-centered cubic lattice c) Wide-angle X-ray scattering pattern from the same film, showing that the facets of the individual QDs also are aligned within the superlattice.

Semiconductor quantum dots (QDs) are nanoscale semiconductors that exhibit size dependent physical properties.  For example, the color (wavelength) of light that they absorb changes dramatically as the diameter decreases.  This phenomenon is due to a concept called quantum confinement and is achieved when the physical size of the QD is smaller than the size of the orbit of the electrons (represented by the electron wavefunction) in bulk forms of the material.  In this research project, a new method was developed to synthesize highly monodisperse lead sulfide quantum dots (PbS QDs) over a wide range of sizes.  Historically, PbS QDs have been synthesized with an acceptable size dispersity of ~10 %.  In this new study, PbS QDs were synthesized with band gaps ranging from 0.7 eV to 1.25 eV (4–8 nm in diameter) with a size dispersity < 3%, which is 3 times better than the typical monodisperse system. As a result of their monodispersity, the QDs readily self-assemble into highly ordered superlattice structures.

The resultant nanoparticles are so highly monodisperse that they readily self-assemble into large-area ordered arrays (superlattices), as can be seen in electron microscopy, and in x-ray scattering.  Well-ordered superlattices of QDs possess enhanced electrical properties within the film, giving rise to potentially coherent charge transport phenomena within the QD structures. 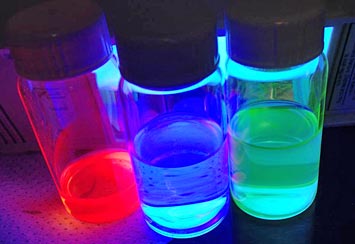 The properties of QDs are dependent on their physical size.

QD devices are most efficient and can be enhanced when all of the QDs are the same size.