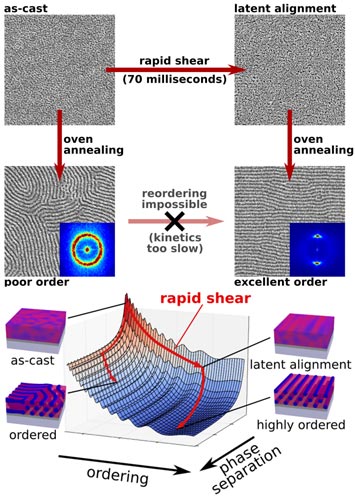 Top: Conventional oven annealing yields poorly-ordered materials, which cannot evolve into a perfectly-ordered state. However, ultra-rapid shearing induces alignment, which then spontaneously evolves into a well-ordered state. Bottom: This behavior can be explained in terms of the energy landscape for ordering. Some pathways bring the sample close to the well-ordered part of the space, whereas other pathways are hindered by energy barriers that prevent reordering.

Self-assembly provides a convenient way to create nanostructures; molecules are designed to form spontaneously desired structures when they are annealed (heated). Traditionally, self-assembly is thought to be an equilibrium process, driving towards the minimum-energy configuration.  However, it is becoming increasingly clear that non-equilibrium effects can have a profound influence on self-assembled nanostructures. This can be viewed as an inconvenience; for instance, kinetic trapping prevents materials from forming perfectly-ordered states. In our work, we demonstrate how non-equilibrium effects can be exploited, in particular by selecting efficient ordering pathways.

We have recently developed a photo-thermal method of ordering self-assembling thin films composed of block copolymers. This method allows us to rapidly order films, and align nanostructures using simultaneous mechanical shearing. In this work, we made a remarkable discovery: ultra-rapid shearing (so fast that order cannot actually develop in the film) leaves an ‘imprint’ in the material, which strongly influences its subsequent assembly during traditional oven annealing. In particular, the shearing induces ‘latent alignment.’ This pre-alignment of the polymer enables the system to thereafter rapidly order to a nearly-perfect configuration.

This is an interesting demonstration of non-equilibrium self-assembly, in the sense that the final structure is strongly dependent on the order of processing steps. This provides insight into how self-assembly proceeds. Moreover, as we have shown, it allows one to access efficient ordering pathways. This has implications for nano-manufacturing, since one can greatly accelerate ordering, making these materials industrially viable.

The discovery of a surprising, previously unknown effect, that ultra-rapid shear leaves a ‘latent’ imprint within a polymer film, could be exploited for industrially favorable, nanoscale pattern generation.  This could make industrial-scale, nanostructured pattern manufacture a cost effective process.

Research was carried out at the Center for Functional Nanomaterials and National Synchrotron Light Source, Brookhaven National Laboratory, which are supported by the U.S. Department of Energy, Office of Basic Energy Sciences, under contract no. DE-SC0012704.