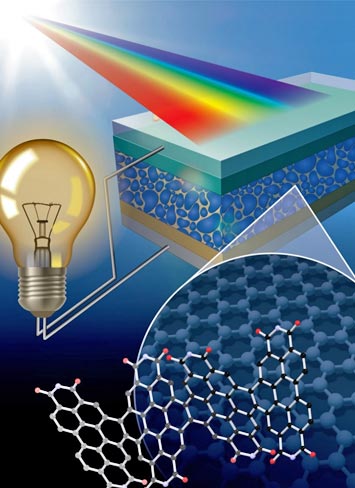 This study introduced a new class of graphene-based, highly efficient electron acceptor for solar cells. The solar cells described in this work possess power conversion efficiencies comparable to state-of-the-art polymer solar cells. The work identified here establishes a lower limit for what can be achieved; thus, a clear path for future development in carbon-based solar panels can be seen.

These NRs have been proposed as low-cost alternatives to carbon fullerenes, which are the typical electron conducting carbon nanomaterials used in organic solar cells. Therefore, these results not only improve the cost advantages of organic photovoltaic (PV) technology over conventional inorganic solar cells but also provide groundbreaking guidelines for designing highly-efficient, electron conductors for high-performance organic PV and other optoelectronic devices.

Primary support for this project was provided by the Chemical Sciences, Geosciences and Biosciences Division, Office of Basic Energy Sciences, US Department of Energy (DOE) under award number DE-FG02-01ER15264. X.Y.Z. acknowledges support by the US National Science Foundation grant DMR 1321405. This research used resources of the Center for Functional Nanomaterials, which is a US DOE Office of Science User Facility, at Brookhaven National Laboratory under contract number DE-SC0012704. Portions of this work were conducted at the Cornell High Energy Synchrotron Source (CHESS), which is supported by the National Science Foundation and the National Institutes of Health/National Institute of General Medical Sciences under NSF awards DMR-0936384 and DMR-1332208. G.E.P. acknowledges Government support under and awarded by DoD, Air Force Office of Scientific Research, National Defense Science and Engineering Graduate (NDSEG) Fellowship, 32 CFR 168a. We thank Columbia University’s Shared Materials Characterization Lab for use of the equipment essential to the research.