Magnetite (Fe3O4), a promising candidate as an anode in lithium ion batteries, is relatively inexpensive and non-toxic. However, the phase transitions that it experiences while operating within a battery remain poorly understood due to the kinetics of lithium ions and local electrochemical inhomogeneities. Using scanning transmission electron microscopy (STEM) techniques that are sensitive to strain, the intercalation of lithium into Fe3O4 nanoparticles (NPs) and the subsequent conversion reactions in the material were investigated in real time. Lithium intercalation processes were found to overlap significantly with subsequent conversion reactions within single NPs, which led to the coexistence of three distinct charging pathways within the NPs.  This phenomenon has not been previously reported.

Intercalation reactions in Fe3O4 may determine the performance of lithium-ion battery materials undergoing lithiation; however, such reactions are difficult to probe in real time. This study utilized advanced in-situ electron microscopy techniques to identify and to investigate kinetically-driven phase evolution within Fe3O4 NPs. 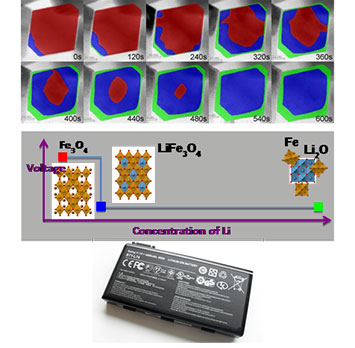 Top) STEM image series, overlaid false colors showing phase evolution upon lithiation, pristine Fe3O4 (red), Li-inserted LixFe3O4 (blue), and Fe+Li2O composite after conversion (green). Middle) The reaction route revealed in this work, from magnetite to rock-salt, then to nanocomposites of Fe and Li2O. Bottom) This work could have an impact on understanding the kinetics (and subsequent stability and longevity) of batteries while they are operating.

Spinel transition metal oxides are important electrode materials for lithium-ion batteries, whose lithiation undergoes a two-step reaction, whereby intercalation and conversion occur in a sequential fashion. These two reactions are known to have distinct reaction dynamics, but it is unclear how their kinetics affect the overall electrochemical response. Here we explore the lithiation of nanosized magnetite by employing a new strain-sensitive, bright-field scanning transmission electron microscopy approach. This method allows direct, real time, high-resolution visualization of how lithiation proceeds along specific reaction pathways. We found that the initial intercalation process follows a well-known two-phase reaction sequence, whereas further lithiation leads to the coexistence of three distinct phases within single nanoparticles, which has not been reported to date. We use phase-field theory to model and describe these non-equilibrium reaction pathways, and to directly correlate the observed phase evolution with the battery's discharge performance.

This research used resources of the Center for Functional Nanomaterials, which is a U.S. DOE Office of Science Facility, at Brookhaven National Laboratory under Contract No. DE-SC0012704. X.Y., E.H., K.S., H.G., and X.-Q.Y. were supported by the U.S. DOE, the Assistant Secretary for Energy Efficiency and Renewable Energy, Office of Vehicle Technologies under Contract No. DE-SC00112704. The authors acknowledge the technical support by Dr. Wenqian Xu from Beamline 17-BM-B of Advanced Photon Source at Argonne National Laboratory. S.Z., H.Y. and C.B.M. acknowledge the support of MRSEC award No. DMR-1120901. S.Z. also acknowledges the support of the NatureNet Science Fellowship. Q.M. and Yimei Z. are supported by DOE/BES, Division of Materials Science and Engineering, under Contract No. DE-SC0012704.  Those in-situ and analytical TEM experiments performed by J.L. and E.A.S. were supported as part of the Center for Mesoscale Transport Properties, an Energy Frontier Research Center supported by the U.S. Department of Energy, Office of Science, Basic Energy Sciences, under award #DE-SC0012673. Yizhou Z. and Y.M. acknowledge the support of the Minta Martin award at University of Maryland, and the computational resources from Extreme Science and Engineering Discovery Environment (XSEDE) supported by National Science Foundation Grant No. TG-DMR130142 and from University of Maryland supercomputing resources.