A team of scientists from CFN, Peking University, and Soochow University designed and characterized a new fuel cell catalyst — a platinum-lead core/shell structure, shaped as a nanoplate. The catalyst shape and chemical composition dramatically enhances the oxygen evolution reaction — important for fuel cell performance — while providing stability during operation. High-resolution studies show that tensile strain in the (110) plane of the platinum shell is key to high performance.

The catalytic activity of new platinum-lead core/shell catalyst is nearly 10? higher than the 2020 DOE target for fuel cell performance. 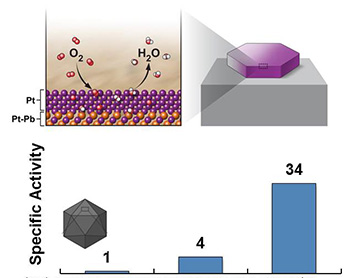 Designing materials having compressive surface strains has been a useful way to create catalysts to enhance the oxygen reduction reaction — an important reaction in fuel cells.  Typically, such surface strain is induced in a core/shell catalyst design, where a metallic core (e.g., nickel, cobalt, iron) is surrounded by a platinum shell.  In this work, we report a class of platinum-lead (PtPb)/platinum core/shell catalysts shaped like nanoplates, which exhibit large tensile strains. The stable Pt (110) facets of the nanoplates have enhanced oxygen reduction reaction activities, reaching as high as 7.8 milliamperes per square centimeter, or 4.3 amperes per milligram of platinum at 0.9 volts, versus the reversible hydrogen electrode.  Density functional theory calculations reveal that the edge-Pt and top (bottom)-Pt (110) facets undergo large tensile strains that optimize the Pt-O bond strength. The intermetallic core and uniform 4 layers of Pt shell of the PtPb/Pt nanoplates appear to make these catalysts highly stable — they can undergo 50,000 voltage cycles with negligible decay in catalytic performance, and no apparent changes in structure or chemical composition.

This work was financially supported by the National Key Research and Development Program of China (No. 2016YFB0100201), the National Natural Science Foundation of China (21571135 and 51671003), the Ministry of Science and Technology (2016YFA0204100), the start-up fundings from Soochow University and Peking University, Young Thousand Talented Program and  the Priority Academic Program Development of Jiangsu Higher Education Institutions (PAPD). Part of electron microscopy work was performed at the Center for Functional Nanomaterials, Brookhaven National Laboratory, which is supported by the U.S. Department of Energy (DOE), Office of Basic Energy Science, under Contract No. DE-SC0012704. The work at California State University Northridge was supported by the US Army Research Office via the MURI grant W911NF-11-1-0353.