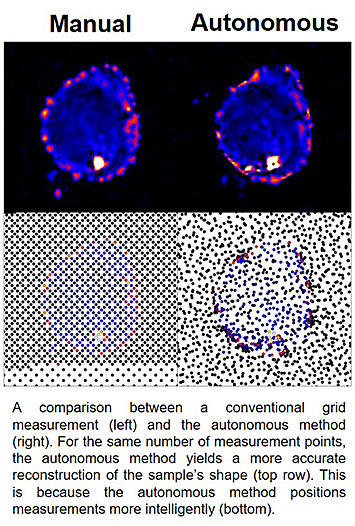 A collaborative team of DOE scientists developed a new artificial intelligence method for autonomous experimentation.  Their versatile algorithm was integrated into an X-ray scattering instrument and deployed to study nanomaterials without need for human interaction.

Machine-guided scientific studies can liberate human scientists from micro-managing experiment details, allowing them to focus instead on understanding the scientific meaning of the results. The methods in this work demonstrate the ability of autonomous methods to achieve high-fidelity searches of experimental problems more efficiently than traditional approaches.

Modern scientific experiments are increasingly complex, requiring scientists to explore innumerable different conditions in their pursuit of next-generation materials. Scientists at Brookhaven National Laboratory and Lawrence Berkeley National Laboratory have developed new artificial intelligence (AI) methods to enable “autonomous experimentation.” In autonomous experiments, the instrument runs without human intervention, automatically collecting data and deciding what measurement to do next. Rather than the human scientist repeatedly deciding what to do next (and then doing it), this autonomous mode automates the process, with the instrument selecting the highest-value experiment to perform. This liberates the human scientist to focus on high-level scientific understanding.

This collaboration demonstrated the effectiveness of a new algorithm for autonomous decision-making. This algorithm selects what measurement to perform by calculating uncertainty, and thus the expected knowledge gain for possible future measurements. In other words, it estimates “what follow-up experiment will teach us the most about this scientific problem” and then automatically launches that experiment. This AI algorithm runs iteratively, collecting data in a highly efficient manner, and thereby automatically reconstructing a useful map of the parameter space being explored.

The CMS beamline, operated in partnership between NSLS-II and CFN, was used for X-ray scattering experiments.

The work was partially funded through the Center for Advanced Mathematics for Energy Research Applications (CAMERA), which is jointly funded by the Advanced Scientific Computing Research (ASCR) and Basic Energy Sciences (BES) within the Department of Energy’s Office of Science, under Contract No. DE-AC02-05CH11231. This work was conducted in part at Lawrence Berkeley National Laboratory and Brookhaven National Laboratory. This research used resources of the Center for Functional Nanomaterials and the National Synchrotron Light Source II, which are U.S. DOE Office of Science Facilities, at Brookhaven National Laboratory under Contract No. DE-SC0012704.