Lithium as a Photocatalytic Performance Enhancer 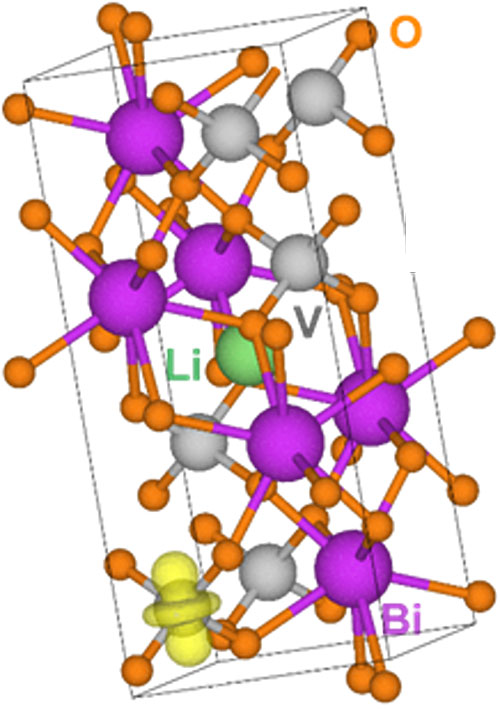 A schematic of the of Li-doped BiVO4 lattice structure.

Bismuth vanadate (BiVO4) is a promising solar water-splitting material because of its stability in water and ability to broadly absorb sunlight. However, the material is plagued by poor electrical conductivity. CFN staff and collaborators improved the photocatalytic performance of BiVO4 thin-film electrodes by 20% by adding a lithium (Li) dopant via pulsed laser deposition (PLD). The enhanced performance stems from an improved photocurrent output (2.6 mA/cm2), which results from better charge transport. Experimental and theoretical studies verified that the Li dopant acts as a shallow donor to improve the conductivity of BiVO4.

BiVO4 is one of the most promising photoanode materials because of several advantages, including its stability in aqueous environments and ability to absorb light over a range of wavelengths. However, the solar energy conversion efficiency of BiVO4 remains limited by poor charge transport. Introducing dopants into BiVO4 has proven to be a feasible method to improve its photoelectrochemical water-splitting performance. In this work, Li is introduced as an interstitial dopant to crystalline BiVO4 thin-film photoanodes via PLD. Solid-state transport characterization demonstrates increased carrier density and electron conductivity in bulk BiVO4 because of interstitial Li doping, which increased both the photocurrent and photon-to-current conversion efficiency by up to 20% for solar water splitting. Computational results based on density functional theory determine the effect of Li doping on the electronic and atomic structures of BiVO4 and verify the role of the Li dopant as a shallow donor that improves the conductivity of BiVO4.

CFN Electron Microscopy and Materials Synthesis & Characterization Facilities were used in this study.

This research used resources of the Center for Functional Nanomaterials and the Inner Shell Spectroscopy (8-ID) beamline of the National Synchrotron Light Source II, which are U.S. DOE Office of Science User Facilities, and the Scientific Data and Computing Center, a component of the Computational Science Initiative, at Brookhaven National Laboratory under contract no. DE-SC0012704. Y.P. acknowledges financial support from the National Science Foundation under grant no. CHE-1904547. Y.P. also used the lux supercomputer at UC Santa Cruz, funded by NSF MRI grant AST 1828315, and the Extreme Science and Engineering Discovery Environment (XSEDE), which is supported by the National Science Foundation under grant number ACI1548562.