Disentangling the Roles of Oxygen Vacancies in Solar Water Splitting 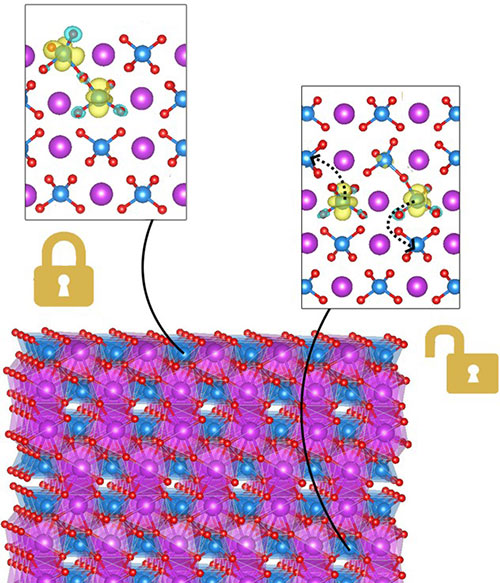 CFN users from the University of Chicago led a collaborative team that combined theoretical and experimental studies to understand and improve the solar water splitting performance of a promising oxide catalyst, bismuth vanadate. The team deduced that oxygen vacancies in the bulk contribute to electrical conductivity, but surface vacancies do not. Nevertheless, surface vacancies may be beneficial adsorption sites needed for charge transfer.

A holistic understanding of the electronic and catalytic properties of photocatalytic metal oxides such as bismuth vanadate is needed to efficiently generate clean hydrogen fuel from sunlight and water.

Bismuth vanadate (BiVO4) is a widely studied oxide in solar water splitting, known for its ease of synthesis, high charge extraction yields, and advantageous band alignment with water. We present a combined first-principles and experimental study of the electronic structure of the (010) surface of BiVO4 aimed at disentangling the impact of the surface and bulk oxygen vacancies on the electronic structure and transport properties. We found that oxygen vacancies are deep donors at the surface as they are in the bulk; our calculations on defect and polaron formation energies suggest that, while polarons formed from oxygen vacancies in the bulk can contribute to conductivity, those at the surface likely do not. Our results also show that out-of-plane structural relaxations at the surface contribute to the relatively immobile nature of electron polarons derived from surface oxygen vacancies. The structural model derived from first-principles calculation was validated by comparing computed results with experimental measurements of single-crystal and epitaxially grown single-crystalline BiVO4 samples. We also found a reasonably good agreement between our calculated and measured work functions for BiVO4 samples with and without oxygen vacancies.

CFN Materials Synthesis and Characterization Facilities were used for this study.

This material is based upon the work supported by the National Science Foundation (NSF) under grant no. CHE-1764399. Part of this research used resources of the Center for Functional Nanomaterials, which is a U.S. DOE Office of Science User Facility, at Brookhaven National Laboratory under contract no. DE-SC0012704. P.J.S. and J.K.K. are supported by the Army Research Office (W911NF-17-1-0254) and NSF CAREER (DMR-1752797). This work was completed in part with resources provided by the University of Chicago’s Research Computing Center.