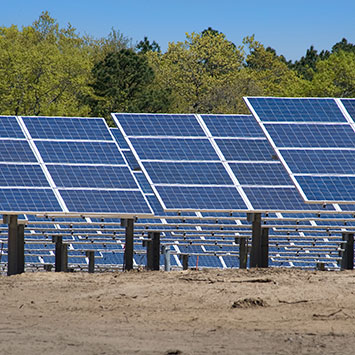 Next generation solar panels could yield substantially lower costs per kilowatt-hour with this technological development.

Two crucial tasks exist for realizing high-efficiency polymer solar cells: increasing the range of the spectral absorption of light and efficiently harvesting photo-generated excitons.  In this work, Förster resonance energy transfer (FRET)-based heterojunction polymer solar cells that incorporate squaraine dye (SQ) were fabricated and investigated.  The high absorbance of squaraine in the near-infrared region broadens the spectral absorption of the solar cells and assists in developing an ordered nano-morphology for enhanced charge transport.  Femtosecond spectroscopic studies revealed highly efficient (up to 96%) excitation energy transfer from poly(3-hexylthiophene), also known as P3HT, to squaraine occurring on a picosecond timescale.  A 38% increase in power conversion efficiency was realized to reach 4.5%; this finding suggests that this system has improved exciton migration over long distances.  This architecture transcends traditional multiblend systems, allowing multiple donor materials with separate spectral responses to work synergistically, thereby enabling an improvement in light absorption and conversion.  This discovery opens up a new avenue for the development of high-efficiency polymer solar cells.

A new energy transfer mechanism has been exploited for the first time, allowing significantly more efficient energy harvesting in P3HT/dye solar cells compared to P3HT-alone solar cells.  Also, broadening the light absorption spectrum into the near-infrared region and developing nanoscale parts to the solar cell has improved the device. 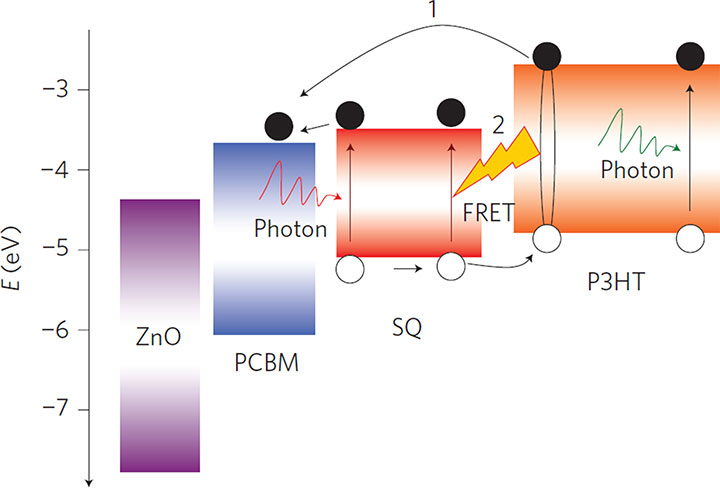 What Are the Specifics?

This work was supported primarily by the SOLAR program of the National Science Foundation (NSF; DMR-0934520) and the Yale Climate and Energy Institute. A.D.T. acknowledges support from a NSF-CAREER award (CBET-0954985) and NASA (CT Space Grant Consortium). Research was carried out in part at the Centre for Functional Nanomaterials, Brookhaven National Laboratory, which is supported by the US Department of Energy, Office of Basic Energy Sciences (contract no. DE-AC02-98CH10886). The authors thank C. Schmuttenmaer, E. Yan and S. Wang for informative discussions.