Research Highlight: Quantum vs. Bulk Behavior: It Depends on the Energy 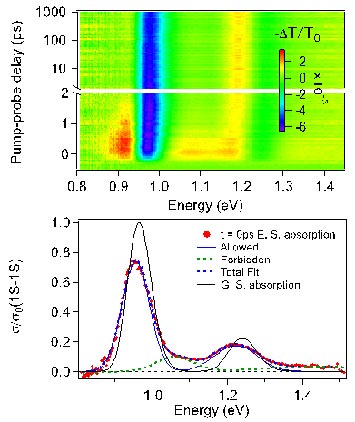 a) Raw transient absorption data (-ΔT/T0) as a function of time (pump-probe delay) and probe energy. The spectra show significant differences at early times (denoted by the circles). b) Decomposition of the excited state absorption spectrum (red dots) at t = 0 ps into allowed (blue) and forbidden transitions (green). The ground state absorption (black line) is shown for reference.

Semiconductor quantum dots (QDs) are nanoscale semiconductors that exhibit size dependent physical properties.  For example, the color (wavelength) of light that they absorb changes dramatically as the diameter decreases.  This phenomenon is due to a concept called quantum confinement and is achieved when the physical size of the QD is smaller than the size of the orbit of the electrons (represented by the electron wavefunction) in bulk forms of the material.  This research project demonstrates that the size of the wavefunction of an excited electron is not static.  When light is first absorbed by the electron, electrons have excess energy that effectively decreases the size of their wavefunction, which reduces the amount of confinement within the quantum dot.  This can be observed by monitoring the color of light that is absorbed by the dot as a function of time.  Right after photoexcitation, the absorption of wavelengths that are normally forbidden can occur due to constraints (selection rules) that are imposed by quantum confinement effects.  In other words, the nanomaterials behave like bulk semiconductors rather than nanoscale quantum dots.  Within a few picoseconds (ps = 10-12 s), the electrons relax, and absorption in the forbidden energy region is no longer observed.

Hot electron-hole pairs in QDs behave as independent charges rather than as excitons, contrary to the conventional wisdom on charge carriers in quantum confined systems.  Overall, this discovery has important consequences for the use of quantum dots in optoelectronic applications, where the distinction between bulk-like and quantum dot-like (i.e. quantum confined) excitations are critically important.