One favorable option to produce high quality, commercially viable GaN crystals is to grow them as nanowires. In this work, environmental transmission electron microscopy (ETEM) was used to image the crystal growth process of these nanowires both in real time and at the atomic scale. The study discovered that the wire grows by multiple double-bilayer atomic steps, which is contrary to the conventional wisdom since most nanowires grow in a single bilayer layer-by-layer fashion. 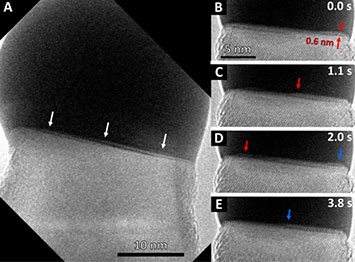 Images from an ETEM video of a GaN wire growing within an ammonia and trimethylgallium environment at 800 °C. Multiple atomic steps are observed at the interface of the growth catalyst and the nanowire, indicated by arrows. 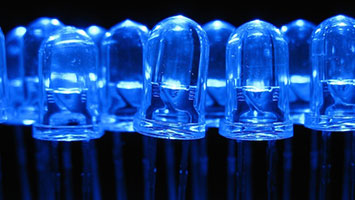 High resolution imaging of the growth of the nanowires could have a critical impact on their implementation in diverse energy and defense device technologies.  Additionally, observing this novel growth mechanism (multiple steps + double-bilayers) provides new insight into the fundamentals of crystal growth, which is of significant fundamental scientific interest.

Nitride materials have had a considerable impact on the technology landscape, with LEDs rapidly displacing conventional light bulbs and providing advances in solid state radar electronics. Despite these existing commercial applications, further technological improvements could be enabled if higher quality nitride crystals could be grown.  Nitrides—in particular GaN—are notoriously difficult to grow without defects, especially on low cost substrates such as silicon.

A nanowire provides a structure that could produce crystals of exceptional quality on cheaper substrates.  However, little is understood about the atomistic details of GaN growth. Here, environmental transmission electron microscopy (ETEM) was used to image the crystal growth process in real time, and at the atomic scale. It was found that the wire grows by multiple double-bilayer atomic steps: this is highly unusual as most nanowires grow in a single bilayer layer-by-layer fashion.

Research supported at the Center for Functional Nanomaterials, which is a U.S. DOE Office of Science Facility, at Brookhaven National Laboratory under Contract No. DESC0012704. We gratefully acknowledge the use of facilities within the LeRoy Eyring Center for Solid State Science at Arizona State University. We acknowledge assistance from Karl Weiss at Arizona State University. We acknowledge Gwen Wright for providing assistance with sample preparation. Helpful discussions with Frances Ross and Federico Panciera are gratefully acknowledged.