A novel hybrid material has been developed that combines zero dimensional (0D) cadmium selenide/zinc sulfide (CdSe/ZnS) quantum dots and stacked, two dimensional (2D) nanoscale sheets of tin sulfide (SnS2). This hybrid materials system possesses an unexpectedly improved photoelectric response (a substantial increase of over 500%) compared with that of either CdSe/ZnS quantum dots or SnS2 sheets by themselves.

When incorporated in a field effect transistor (FETs), the hybrid materials’ substantially increased photocurrent response was due to an energy transfer process between the 0D and 2D constituents. This synergistic approach of sensitizing the SnS2 nanosheets by quantum dots provides a promising route for developing highly efficient energy-harvesting composites, which can be broadly exploited in applications, such as photo-detector devices and solar panels. 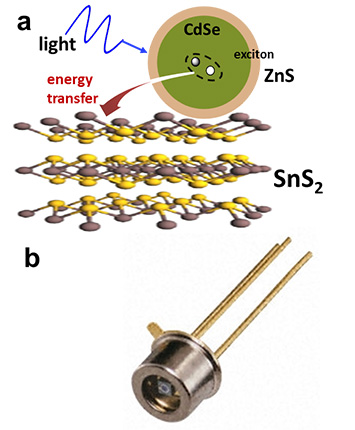 a) Schematic showing the interaction between the SnS2 nanosheets and a CdSe/ZnS QD via energy transfer from the exciton in the QD. b) These hybrid composites could have a significant impact on the performance light harvesting efficiency of sensitized photodetectors.

However, their low dimensionality makes photon absorption poor. In this study we present a straightforward method to increase photon absorption in such LMDs. We show that doping of single and few-layer of tin disulphide (SnS2), with colloidal CdSe/ZnS quantum dots (QDs) results in 0D-2D hybrids with large photon absorption cross-section and high charge mobility. Using time resolved single nanocrystals photoluminescence microscopy and monitoring the blinking dynamics of QDs alone and part of the LMD, we were able to unveil the interaction between the two nanoscale components as non-radiative energy transfer and to find that the rate of this process increases with the increase in the number of SnS2 layers [1]. We also found that such 0D-2D hybrids, when incorporated into field effect transistor devices, outperformed the LMD only devices by 500% in the photocurrent response and displayed substantially increased spectral responsivity [2].

§Department of Mechanical and Materials Engineering and ?Department of Electrical and Computer Engineering, University of Nebraska-Lincoln, Lincoln, Nebraska 68588, United States

Research carried out at the Center for Functional Nanomaterials, Brookhaven National Laboratory, which is supported by the U.S. Department of Energy, Office of Basic Energy Sciences, under Contract No. DE-SC0012704.